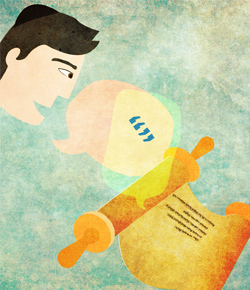 “One who wishes to translate from one language to another by rendering each word literally and adhering to the original order of words and sentences . . . will end up with a translation that is difficult and confusing. Instead, the translator should first try to grasp the sense of the subject and then explain the theme, according to his understanding, in the other language . . .”

This is elementary to any translation attempt. The question, however, that the translator faces is: How far to go? For every translator grapples with two conflicting aims: the aim of faithfully conveying the content of the original, and the aim of making it not only understood to his intended audience but also as attractive and as “natural” as possible in its foreign enclothment.

One example of many:

The modern Western mind recognizes no sacred ideas or inviolable axioms. In communicating a thought, there is no greater sin than

“taking yourself too seriously,” being “dogmatic” and failing to offer a “balanced view.”

Above all, one mustn’t be so sure: keep it light, with a periodic wink at the audience that says,

“Hey, guys, I may be teaching you something, but don’t think that I’m this pompous know-it-all. We’re just throwing some ideas around.”

Torah, on the other hand, unabashedly goes about the business of informing and instructing its student. As G‑d’s blueprint for existence, it is free of self-deprecating humor and moral ambivalence. It presumes that you are taking it seriously, and proceeds to tell you the way things are and the way they ought to be. And yes, it regards the truths it conveys with reverence.

So what is the translator/adapter to do? Basically, he has two options. He can limit his tampering with the original text or idea to its rearticulation in the new language, while preserving the Torah’s style and approach. If the Western mind will judge it “religious,” “archaic” and “closed-minded,” so be it. Ultimately (once you solve the problem of how to get someone to read it), its eternal content will assert itself over the reader’s prejudices.

Or, the translator can assume, to a certain extent, the tone of modern writing. He can attempt to truly translate—“to grasp the sense of the subject and then explain the theme, according to his understanding, in the other language” not only in the dictionary sense of “language” but in the broader cultural-conceptual sense as well.

But is there a choice? Does the Torah allow one to articulate its teachings in such a manner? The Lubavitcher Rebbe addresses this issue by finding its precedent in Torah.

In the 31st chapter of Deuteronomy, the Torah describes how on the last day of his life Moses committed the entire Chumash (the “Five Books of Moses”) to writing. He then commanded the Levites: “Take this Torah scroll, and place it at the side of the Ark of the Covenant of the L‑rd your G‑d, and it shall be there as witness for you.”

Rashi, in his commentary on the verse, writes:

Everything in Torah is a lesson in life, and carries an eternal and universal relevance. What, asks the Rebbe, is the deeper significance of this debate?

Our sages tell us that the entirety of Torah is encapsulated in the Ten Commandments given to us at Sinai and inscribed by G‑d on the two Tablets of the Covenant. Over the next 38 years, as the people of Israel wandered through the desert, Moses taught them the particulars of Torah, which he also wrote, by divine dictation, in the Chumash.

In other words, the Chumash is the first “translation” of Torah, its first rearticulation into terms comprehensible by its intended audience. Moses saw the entirety of G‑d’s communication to humanity embodied in the Ten Commandments; but the Jewish people needed a more detailed and explicit version. Hence, G‑d’s re-communication of His word and law through Moses’ mind and quill with the Chumash.

Thus, explains the Rebbe, the debate between Rabbi Meir and Rabbi Judah (voicers of the two opinions cited in Rashi) is a debate as how one is to communicate Torah. According to Rabbi Meir, the Torah scroll must be kept within the Ark which holds the Tablets of the Covenant. While the “translation” may detail what was generalized and express what was implied, it is not to depart from the context of the original. It must confine itself to the area enclosed by the “walls” that define the original articulation.

Rabbi Judah disagrees. The Torah is placed on a shelf outside of the Ark’s walls. True, it must adhere to the content and spirit of the original—the shelf, remember, is firmly attached to Ark’s exterior—but it must extend into the space occupied by those who are still outside of the original’s parameters.

This sheds light on another thing that the Talmud says about Rabbi Meir. A rule of thumb in the Talmud is that whenever Rabbi Meir and Rabbi Judah disagree on a matter of Torah law, we follow the opinion of Rabbi Judah. Why is this so?
The Talmud quotes Rabbi Acha bar Chanina as having said:

“It is revealed and known before He who spoke the world into being that there was no one equal to Rabbi Meir in his generation. So why was the law not established in accordance with his views? Because his colleagues could not fully comprehend his reasonings.”

The fact that Rabbi Meir insisted on keeping his expositions on Torah completely within the context of the pure idea meant that those of a lesser comprehension of Torah than his could not fully relate to what he was saying.

Perhaps, concludes the Rebbe, this is why Rashi cites Rabbi Judah’s view before Rabbi Meir’s, reversing the order in which they are quoted in the Talmud. Rashi is telling us that in most cases, Rabbi Judah’s approach is the desirable one, while Rabbi Meir’s is preferable only in regard to a minority of audiences and circumstances.

Among the disciples of Rabbi DovBer of Mezeritch (the second leader of the Chassidic movement), there were differing opinions regarding the dissemination of the esoteric teachings revealed by their master. There were those who argued that the sanctity of this most intimate aspect of Torah must be safeguarded and shared only with a select worthy few. Others, chief amongst them Rabbi Schneur Zalman of Liadi (who was later to found the Chabad branch of Chassidism), were of the opinion that they must be circulated as widely as possible; they transcribed Rabbi DovBer’s teachings, made many copies, and actively distributed them to the wider Jewish community.

One day, one of these transcriptions was discovered languishing in a mound of garbage. The sight of this caused great pain to all Rabbi DovBer’s disciples, and renewed the critique of those who “cheapened” their master’s holy words with their indiscriminate distribution. Rabbi Schneur Zalman responded with a metaphor:

“The king’s son had fallen ill,”

he began his tale,

“and the royal doctors could offer but a single cure: a potion that would be prepared from the powder of a certain gem. This gem, however, served as the centerpiece of the royal crown. Furthermore, even if the crown—the most precious possession of the throne—were to be dismantled, only a slim hope existed to save the prince’s life, who had deteriorated to the point that his ability to swallow the potion was in doubt.

“But the king decreed:

‘Grind, pour and squander my most precious of treasures. Perhaps a single drop will enter the lips of my son, and his life will be saved . . .’”

> The Meaningful Life Center is a spiritual wellness centre, empowering you to discover your unique voice and find meaning in everything you do.

Neutrality or silence vs Taking sides

Choose Happiness – make up your mind

”“Folks are usually about as happy as they make up their minds to be.” .”

Having faith in the ocean Humanity

””You must not lose faith in humanity. Humanity is an ocean; if a few drops of the ocean are dirty, the ocean does not become dirty.” ~ Mahatma Gandhi .”

Blossoming and healing the planet

””There is so much love in your heart that you could heal the entire planet. But just for now let us use this love to heal you. Feel a warmth beginning to glow in your heart center, a softness, a gentleness. Let this feeling begin to change the way you think and talk about yourself.”.” […]